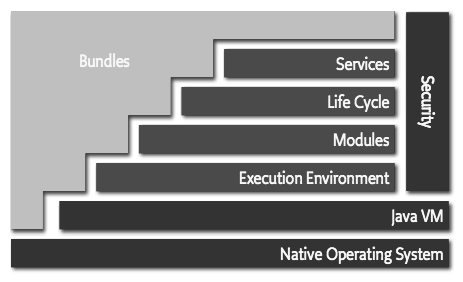 OSGi is a software specification developed by the OSGi Alliance since 1998 for, initially, service gateways. Supported by numerous fortune 500 companies around the world it has been used in a very large number of systems, from the very small embedded to the large cloud based systems.

A misconception is that OSGi is an application server like Java EE. This is wrong, OSGi is a reusable component model for developing applications that range from small to extremely large. OSGi addresses the key problems in this kind of development. In today’s world with almost 1.5 million components on Maven Central it is easy, and cheap, to find suitable components. However, the independent uncontrolled life cycle of these components can make managing these numerous transitive dependencies a problem in itself. The complexity of managing the evolution of larger systems can easily outgrow the complexity of the domain itself.

The primary aspect of OSGi to address, not as many expect the modularity layer, but its service model. This model makes it possible to loosely couple modules via the api’s they provide and consume instead of their implementation. This is the first comprehensive implementation of programming by contract. It makes for much more mantainable and supportable software. An added benefit of the loose coupling, especially for IoT scenarios, are the dynamics that are enabled. Though this enables the nice to have feature of dynamic updates of bundles, its most important benefit is that the service primitive maps extremely well to many common software patterns. It is a similar step in software engineering as object oriented software was in the late eighties. Micro-services share many of the underlying concepts but the advantages of having a software primitive that is extremely well supported by the environment is tremendous. Sadly, service share the same problem objects had when they were new, the were hard to understand until you understood them.

The history of the OSGi and aQute have been closely intertwined since the inception of the OSGi Alliance. Peter Kriens, the founder of aQute, was the Ericsson representative the expert group that developed the first specifications. In 2001 aQute was asked to take on the editing and production of the specifications, now consisting of over 1500 pages. As an evangelist he promoted OSGi on a myriad of conferences and workshops all over the worlds. In 2013 the OSGi Alliance hired aQute to execute the OSGi enRoute project, arguably the easiest way to learn OSGi.

Peter Kriens is one of the five OSGi Fellows.

If you are looking for assistance with OSGi then you can contact Contact us to talk. We can provide a wide palette of services. We want to help you master the technologies your teams are unfamiliar with.