Although I am often puzzled about some developer choices, almost every developer seems to agree that manipulating properties suck. That is, I’ve never met anybody that likes to write this kind of code:

This style of programming is loud, ugly, redundant, and extremely error prone. When you have to work with an API like this you feel dirty. As said before, this is one of few consensus things in Java.

When I took a year off in 2012 (!) to do JPM I added a facility to bnd define my configuration schema in a normal Java interface:

We use the method name as the property key and the return type as the value type. The ‘magic’ converter (which also became an OSGi specification in R7!) handles the low level details of converting from the value in the map to the (generic) return type. If the map holds a Long[], the return type can be a List<Byte>. No sweat, all these conversions are handled completely transparent. Clearly, this is a huge improvement over constant string property keys.

At the time, I also added annotations for Metatype support which could provide defaults and options. (Although the data type could be an enum which is mostly the same idea.)

Then, after I returned to the OSGi Alliance I worked to convince the EG to adopt this style in DS, this fortunately worked out. The annotation interface as configuration was introduced in R6.

I did not get my full interfaces but annotation interfaces do provide 95% of the goodies. So that is good enough. (And they have a nice way to specify defaults.)

When I developed the bnd DS annotations (2009??) I also added metatype support. If you designated an interface from a @Component annotation then bnd would create the appropriate metatype XML in your bundle. And then the magic happened … When you went to Web Console you could edit your configuration from a very nice user interface. (Everything is relative, for the GUI challenged Java developer world it is extremely nice.)

We also adopted this feature in the OSGi R6 and then added support for this in bnd. We’re now working on bnd 4.0.0 where the old style annotations that bnd pioneered will be gone. An era gone by … Clearly, it is good see how much of that ended up in the OSGi specifications.

All Is Under Control, Except …

Then there was this nagging question from the back of the room: ‘How about updating configurations?’. The only answer I had was: ‘Well, ehhh, use Web Console?’. Then they usually replied: ‘We need to do this programmatically!’. To which my sad reply then was: ‘Hmmm, use properties?’.

Having to revert to define property keys as constant strings is of course a giant defeat.

While working for SMA in Kassel I ran into this problem head on. I had (rather strongly) advised them to store all configuration in Configuration Admin. Although Configuration Admin clearly is not the best solution in all cases, having one solution usually far outweighs the micro improvements one can make with a dedicated tool. (This strategy has worked out extremely well.)

Back to Type Safety

And then the small detail of course that annotations cannot have set methods … Difficult.

So one day, probably after having been inspired by Mockito, I realized that I could leverage the guaranteed calling order of Java.

If I created a proxy on the interface I could record what method was called. Then immediately afterwards, I could call a set method with a value. The set method could use the last called method’s name and store the new value under this name..

This is very similar to how you build up a mock with Mockito and some other libraries.

This is quite a complex sequence so let’s (ok, try to) elucidate it with a sequence diagram: 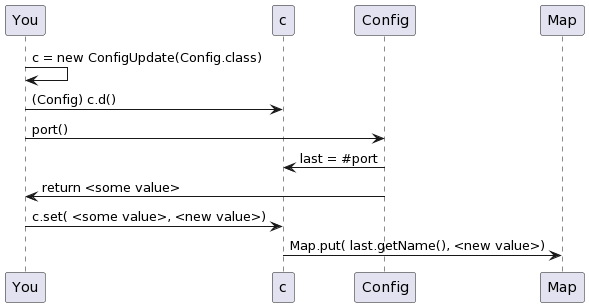 This looks a tad complicated but in code it looks surprisingly natural:

Some time ago there was a question on Stackoverflow by someone who was struggling with this. I therefore created a Config Helper class that can update Configuration Admin programmatically using the configuration interfaces to ge the property names and types.

You can find the code at Github. If there is an open source project that wants to adopt it, let me know. If multiple people find this interesting I can also push it to Maven Central.